The term precision can often be used to describe robotic processing for all the obvious reasons. Robotic processing is repetitive, exact, accurate…in a nutshell, it’s precise. And all of its supporting functions and equipment need to have that same level of precision for the operation to be successful.

The new robotic cells now in use at Tervis (www.tervis.com) are no different. The North Venice, Fla. manufacturer of insulated plastic drinkware uses a series of Dorner 3200 Series conveyors with precision belt technology to move the inner and outer tumblers into robotic cells for processing. Precision belt technology is offered on both of Dorner’s 2200 and 3200 Series conveyors and is ideal for common drives, indexing, positioning and highly loaded belt conveyor applications in industries such as product assembly, manufacturing, and packaging. It’s these conveyors that provide the accurate indexing of the tumblers to ensure smooth, uninterrupted flow of production at Tervis. 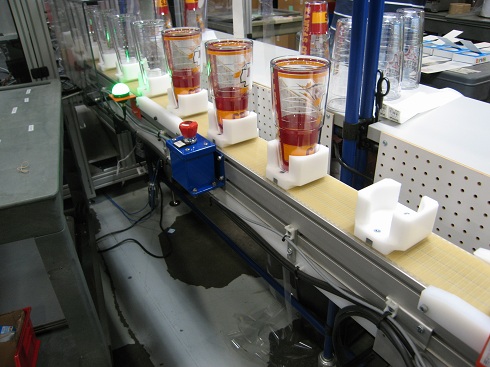 The push to further automate its manufacturing processes is a testament to the growth Tervis has experienced in recent years. Founded in 1946, Tervis is a leader in the plastic insulated drink market, thanks in part to its unique, double walled design that keeps drinks colder and hotter longer. Tervis offers a variety of drinkware sizes and styles and can be customized with virtually any design including some of the world’s leading brands and sports teams.

To accommodate its growth, Tervis recently increased its production floor space over 60% and increased its workforce by 40%. When the company decided to further automate its production facility, it turned to RND Automation and Engineering of Sarasota, Fla. RND specializes in custom factory automation, robotic work cell, packaging and material handling applications. The direction from Tervis was to implement new automation in a steady, phased approached to achieve the best results. Tervis and RND decided to focus on production steps in the process that did not require the human touch and represented opportunities for automation and repetitive motion labor reduction.

The machine that RND engineered consisted of several technologies including the use of robotics to automate the various manufacturing processes. The machine required a delivery system for the inner and outer tumbler, and since positioning of the tumblers is crucial, the system had to be accurate and repeatable. Dorner’s 3200 Series conveyor perfectly complimented the integrated machine from RND Automation. The Precision Move conveyor package utilizes the latest in timing belt technology to provide repeatable movement accuracies +/- .02” up to 100 indexes per minute. The servo driven conveyor has a flexible fixture attachment system which accurately locates fixtures +/- .005”. In addition, the precise conveyor has side guides that hold side to side tolerance +/- .01” for loading, unloading, or locating at assembly stations.

RND initially designed and built a prototype machine for Tervis. After seeing the increase in productivity, the company ordered several more machines for its facility. Once fully operational, the machines are expected to process a substantial portion of Tervis’ product offering, reducing cycle times and the production footprint.