Imagine trying to paint a surface sprinkled in saw dust. Obviously, before completing your first swipe of the brush you’ll need to clean the surface so it’s smooth and free of debris. 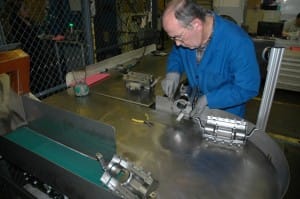 This is the type of problem Buhrke Industries was experiencing with a custom part it manufactures for an automotive airbag assembly. Throughout the manufacturing process, the stamped assembly housing was becoming magnetized. This magnetism was attracting small particles to the part, and ultimately affecting its overall appearance.

“Our customer was applying an e-coating to the part, but due to the magnetism it was attracting foreign particles and leaving a rough, substandard finish,” said Steve Amaro, process engineer at Buhrke Industries, an Arlington Heights, Ill., stamper/assembler and Tier One supplier to the automotive industry. “Clearly, we needed to demagnetize the part to leave them with smooth finish for the coating process and keep our customer happy.” 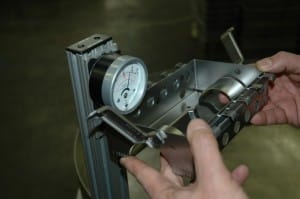 Amaro said the welding involved in making the robotic airbag housing causes the part to become magnetized. Welding involves high current, and anytime current is passed through a conductor or plasma arc, it generates a magnetic field. While some welding can produce magnetic arc blow, which is a more serious problem that can affect the integrity of the welds, the issue for Buhrke Industries was that the part was becoming magnetized just enough to attract small metal particles.

To solve the problem, Amaro added both a demagnetizer to the production line and a conveyor to help improve product flow. Before the issue was identified, the robotic airbag housing assemblies traveled down a chute and collected together on a table. Often, the parts would back up into one another before each was individually inspected by Veljko Sisarica, a long-time employee of the company. 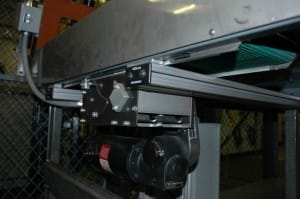 The solution was to install a conveyor into the table that would allow housing assemblies to slide down the chute and onto the conveyor, moving them the proper distance away from the demagnetizer. Buhrke Industries uses more than 20 Dorner conveyors in a variety of more clean-room environments.

After cutting out a space on the table, Amaro re-purposed a spare Dorner 2200 Series center drive conveyor from a previous operation, so that the conveyor belt was flush with the table. Two tall guide strips were mounted on the table alongside the three-foot long, six-inch wide conveyor to keep housing assemblies positioned straight on the belt and as they discharged onto the table.

“We needed a more aggressive belt, a belt with more grip to provide enough friction to keep the assembly housings moving onto the table and off the conveyor,” Amaro said. “When three or four of our housings back up into each other, half of which may already be on the table, that’s extra weight that the belt needs to keep moving to ensure all four move off the conveyor and provide enough space for the demagnetizer.”

“Since the belt had a smooth surface, as was called for in a previous application that the conveyor was used in, it was slipping under the parts. We needed a different belt to handle this job.”

Amaro received a selection of belt swatches to try out. The new belt, a high friction type 64, arrived in three days, and conveyor was back in service.

“The conveyor runs great and we’re very pleased with the new processing line we now have in place,” Amaro said. “Our customer is happy because we’re able to supply them with more than 350,000 demagnetized housing assemblies. We pride ourselves on being able to solve problems and work with suppliers that do the same. Bottom line is that our customer is satisfied, and we’re pleased with the service we received from Dorner.”