Conveyor belts are on the front lines of your conveyor system. They come in scores of varieties, from lightweight to heavy duty, and in a range of surface materials and coverings. With such a vast selection, it’s important to find the right belt—and overall conveying system—for your business needs and industry requirements

A leader in conveyance automation solutions, Dorner offers standard lines and highly customized systems. We’re also one of the few companies of our kind with an in-house belting cell operation. This means we’re able to partner with leading suppliers to offer custom conveyor belts and conveying systems that perform and last.

Why Dorner Conveyor Belts Stand Out

Dorner conveyor belts stand above the rest compared to the products of other conveyor belt suppliers for a variety of reasons. Our in-house team performs peerless operations including cutting, splicing, v-guiding, testing, and inspecting all of our customer’s conveyors. We also provide industry-leading belt tracking, tensioning methods, and speeds.

With our unique V-guiding techniques, we can achieve superior tracking and accurate product movement with our conveyors. Before the belt is manufactured, we complete V-guiding to improve accuracy and integrity with a seamless belt guide. Other companies in the market apply V-guide after splicing, resulting in lowered accuracy and a higher risk of potential failure points.

In addition to the unrivaled quality of Dorner conveyor belts, our lead times are among the fastest in the industry, ensuring your business’ production line can keep running smoothly.

We have established ourselves as one of the leading conveyor belt manufacturers in the USA and around the world, and the quality of our products consistently demonstrates our commitment to developing innovative, effective conveying solutions.

CONFIGURE A CONVEYOR
REQUEST A QUOTE

Looking for a Replacement Part?

Flexible fabric belts feature several layers in their construction, including the cover material, strength layer, and pulley side material. They also allow for small pulley diameters, which simplifies product handling and integration tasks.

Available in a range of materials and weights, fabric conveyor belts can be woven or nonwoven, and they are suitable for a number of applications of varying weight classes. You can utilize fabric belts in different industries, including automation, material handling, and some FDA food processing applications. 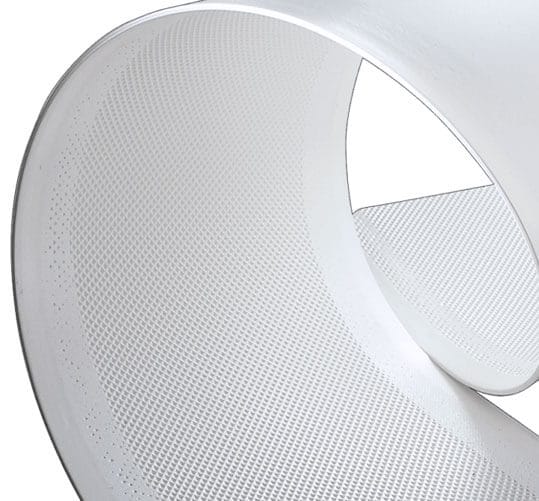 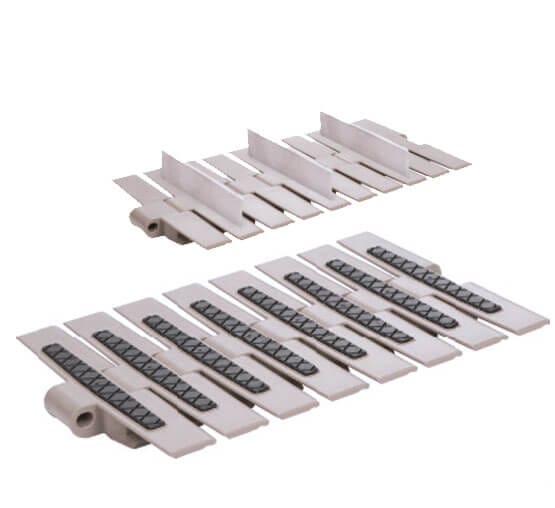 With a solid construction that prevents fraying, delamination, and joining, modular plastic conveyor belts are versatile and durable. Modular belts can be customized to suit different widths and lengths, and the open surface area is often ideal for applications like cooling and draining, which is especially useful for sanitary or cleanroom processes.

Because they are easy to clean, sanitize, maintain, and repair, modular belts are great options for applications in many industries, including manufacturing, pharmaceutical, medical, food, bakery, and more. Dorner offers a variety of types of modular conveyors from our 2200 and 3200 Modular Belt Conveyors series.

Ideal for complex layouts and various environments, flexible chains (or table top chain, in some cases), allows the use of the entire belt width, granting exceptional product handling flexibility. With a knuckle that moves through the center of the conveyor track, flexible chains feature open belt sides, and these conveyors are suitable for a number of applications, including automation, secondary packaging, manufacturing, bottling, and more. You can find flexible conveyor chain options in our FlexMove line, as well as our AquaGard 7100 Series Conveyors. 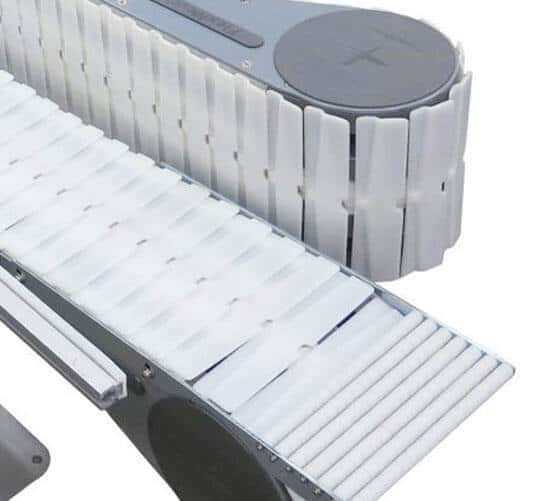 As a leading conveyor manufacturer, we offer custom conveying solutions for a variety of applications, including:

We also offer conveyors with specialized features to further optimize your operations, including:

How to Determine Which Conveyor Belt I Need

Many Dorner conveying solutions allow you to select the proper belting option for your specific needs. In addition to your intended general application use, such as processes you perform and products you manage, you’ll need to consider some other factors when determining which belt you need, such as:

On the other end of the spectrum, polyethylene is well-suited for lower temperatures, making it suitable for pharmaceutical processes or frozen food conveyor belting.

If you deal with items that can cause wear and tear on your belts, you should assess the abrasion resistance capacity of the belts you’re considering. Polyurethane and nitrile-butadiene rubber are highly rated for abrasion resistance.

When the products you handle have rough surfaces or edges, they can damage your belts if you choose an insufficient material. For example, the nature of the metalworking industry and other industries that might encounter sharp edges call for a durable belt that can withstand cuts, scrapes and punctures.

There are many more considerations to make when purchasing a conveyor belt solution, including:

Color preference may seem like a superficial consideration, but this doesn’t just apply to aesthetics. Conveyor color can actually make a significant difference in the effectiveness and efficiency of your operations. Choosing a black conveyor can be useful in picking processes where it is important to be able to easily distinguish between colors.

Dark surfaces may also conceal inkjet printing runoff, which is an important thing to keep in mind.

In many cases, the color of a conveyor correlates to the material used or the function of a belt. For example, blue conveyors are typically associated with safety and hygiene, and they are often found in food-handling environments.

Conveyor belts have a lot of options, including surface material and texture, pitch, and hinge design.

Your intended application will help define which surface design is best for you. Examples include:

Of the conveyor belt material types, modular belts are the most useful for sanitary or food-safe applications.

Modular belts come with open and closed hinge options. An open-hinge design is ideal in situations where sanitation is of the utmost importance, as this design makes it easier to spot residue or debris. Open hinge belts also make object removal and cleaning processes much easier.

On the other hand, closed-hinged belts have higher capacities for abrasion resistance and durability than open-hinge belts.

Modular belts are available with a variety of surfaces, including flat top, flush grid, raised rib, and more.

In virtually every industry, conveyors are a valuable asset that improves efficiency, precision, and production.

Dorner is one of the most adaptive and innovative conveyor manufacturers in the world, offering various types of conveyor belt solutions for applications in a range of industries, including the following.

When operating in the food processing, handling, and packaging industry, it is crucial to utilize a food grade conveyor belt wherever a conveying solution is required. At Dorner, we specialize in a number of food-safe conveyors, such as our AquaPruf line, to ensure efficiency and safety in food-related processes, such as those involving:

In industrial and manufacturing environments, conveyor belts can make efficient use of space, improving productivity and ensuring worker safety. Dorner conveyors, like products from the Precision Move series, make exceptional additions to industrial processes such as the following:

We manufacture a number of cleanroom-certified conveyors suitable for a range of applications in manufacturing healthcare-related goods, such as:

Conveyors can help you improve commercial processes in warehouses that sort and ship a variety of products. Integrate a Dorner conveyor into your operations relating to processes involving:

What is a Conveyor Belt?

In its simplest form, a conveyor belt is a continuously-moving material handling system designed to transport objects from one location to another. Conveyor belts commonly utilize continuous bands of fabric, metal, or rubber to move objects. The use of conveyor systems in a wide range of industries generally improves efficiency, safety, and cost-effectiveness.

With enough time and use, you may find that you need conveyor belt replacement parts. If you end up wondering how to repair conveyor belts from Dorner, the answer is simple: contact us to request replacement conveyor parts or information about repairs.

You can request a conveyor belt replacement through our online form or by calling one of our experts.

The right conveyor system for your needs leads to higher quality, increased productivity and optimized efficiency. When one of Dorner’s standard lines doesn’t meet your production or space needs, a custom solution is worth considering. Custom conveyor systems can be transformative for your business and bottom line.

How to Order the Belt I Need

The Dorner team is happy to help you place your replacement belt order, as well as provide information about our Parts Kit program so you have what you need in-house before you need it.

If you’re looking to replace a Dorner fabric or modular belt, your first step is to locate its serial number and model number. You will need these two pieces of information to make your request. Then you can complete and submit this form, and someone from our parts team will be in touch with you.

If you need a non-Dorner replacement fabric or other belt, our aftermarket department might be able to help. Contact us by aftermarket@dorner.com email or call us at 800–397–8664 to speak with a customer service representative.

How Do Conveyor Belts Work?

Whether it is moving pharmaceutical drugs for bottle filling or delivering fresh globs of cookie dough from prep area to oven, when you see a conveyor belt in action, this work appears almost effortless—magical, even. This brings up the question: How do conveyor belts work? What factors are considered in conveyor belt construction?

First, it’s important to consider that not all conveyor systems have belts. Roller conveyors are commonly used to accumulate items, while belt conveyors are designed to move items of varying size, such as parts or finished products.

Fundamentally, though, conveyor systems run similarly whether rolled, wheeled, or belted. They are generally motor-powered, positioned on a solid frame, and run in a loop to move items from point A to point B. Configuration, such as the frame shape or drive placement, is another aspect of conveyor belt construction.

A conveyor system’s specifications determine its capabilities, such as load capacity and flow rate. For example, the speed of a conveyor system ultimately defines speed capacities. Conveyor belts are rated by per minute, while roller conveyors are measured by linear velocity. This speed, regardless of how it is measured, is what gives conveyors such an advantage over human labor.

Keeping your employees adequately trained and informed reduces downtime and increases workplace safety. Whether as part of your installation or at a later date, our knowledgeable field service staff members are available to lead a variety of training programs for your team. Our conveyor system training services include group and one-on-one sessions that cover use, care and preventative maintenance. We cover topics such as system safety, mechanical troubleshooting, and parts and belt changing.

In addition to on-site conveyor belt training services, your team will have access to our extensive online library of guides, whitepapers, case studies and videos. Finally, the Dorner blog and newsletter often features how-to and other helpful content.

Dorner offers a comprehensive preventative conveyor belt maintenance program, available in two tiers: labor or parts and labor. This program begins with a free site visit during which our team will evaluate your needs. From there, we will develop a custom proposal outlining our recommended service intervals. With a ​​conveyor belt preventive maintenance plan in place, you can trust that your Dorner conveyor will continue to meet optimal performance expectations.

Among the services provided in the conveyor belt maintenance program are inspection, adjustments, debris removal and lubrication. Additionally, members of the Level 2 service plan receive a 10 percent discount on parts.